“The brain is the most fascinating object in the universe. Every human brain is different, the brain makes every human being unique and defines who they are.”
Stanley B. Prusiner
(Nobel Prize in Medicine, 1997)

The knowledge about the brain and how it works are very interesting for scientists and non-scientists alike. News about advances in the neuroscientific field talk about curing diseases, improving our educational system, developing more effective sales strategies or answering questions about dreams, emotions or addictions.

The theory of the triune brain may not be accepted by the entire scientific community, but its basis is very simple and is used in the business world to explain the decision-making mechanisms that we humans currently have. Our brain is the most complex system known, so if we want to understand it, it is necessary to find patterns and regularities in its functioning and structure, looking for useful and simple explanations.

Paul MacLean, an American doctor and neuroscientist, developed the theory of the triple brain in 1970. According to this vision, the brain had experienced three great stages of evolution as a consequence of which the superior mammals have three brains in one: the reptilian, the limbic system and the neocortex. Each of these three brain systems has its own logic of functioning and have been appearing in our evolutionary line in a sequential way, one over the other. 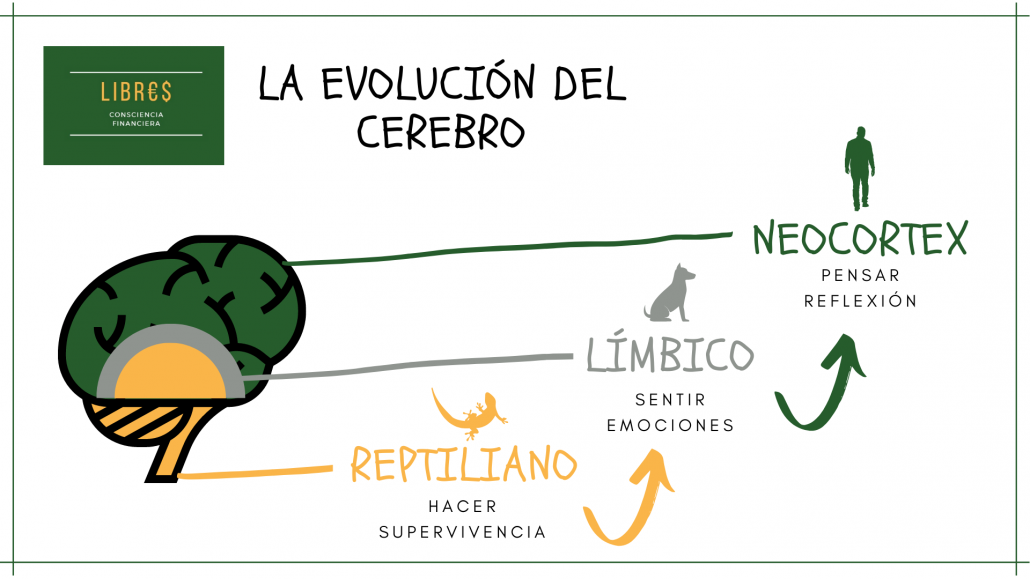 This simple theory of MacLean’s triune brain helps us to analyze and understand the three aspects that make up decision making: make-feel-think. If we follow the evolutionary order explained above, we would first do, then feel something and finally analyze it. What happens when this is the sequence in our actions? That we let our instincts carry us, that we do not control our emotions, that we react: it is that part of the human being that puts us on the same plane as a lizard or a crocodile, the primitive side that pushes us to act as reptiles have done for millions of years.

According to psychologist Daniel Goleman, father of EQ, positive management of emotions is more decisive for success than IQ. Therefore, we could talk about an IQ-Financial IQ: 90% emotional and 10% technical information about finances. Hence the importance of understanding our brain and being aware of our emotions in order to provide them with intelligence when relating to money. Taking into account that the Financial IQ has little theory, the basis for having a healthy economy and being comfortable with the situation is based on knowing oneself.

Analyze how you act, what is your order in decision making, which brain predominates according to what aspect of your life you are considering, and do it specifically with money. When you spend, save or invest, do you think before you act, do you let yourself be carried away by emotion, by wanting to pretend, do you not analyze what you are going to do until it is no longer possible to do so? If we do not want to be carried away by our instincts or emotions, we must pay attention to our actions and be aware at all times of what we are doing or deciding. And the important thing first is that you are aware of how you make decisions, without judging or criticizing yourself. As Stephan Covey said “Be patient with yourself. Self-growth is tender; it is sacred ground. There is no greater investment.”

Next week: Use your brain to make good decisions.

For 25 years she was Director of the Innovation and Products Departments at Banif and Andbank. Currently she is Manager at Dextra Corporate Advisors, an independent M&A and corporate boutique, and advisor at Navis Capital Desarrollo, SGEIC, an alternative investment fund manager registered with the CNMV. She is also part of the WA4STEAM association, an international community of women business angels who seek to expand the female presence in the STEAM fields, providing not only capital but also becoming a strategic partner for future leaders.

This text may be reproduced if PROA Comunicación is mentioned as its original source.