Spain, among the 10 Most Attractive Countries for Digital Talent

Spain is one of the ten most attractive countries to attract and retain digital talent, one of the most demanded professional groups in the world and, according to a new study by Boston Consulting Group and The Network, an international alliance of employment websites in the world in which Infoempleo is a member, also one of the professional groups most willing to relocate. More than two thirds of professionals specialized in the digital field are open to moving to a different country to progress in their careers, with the US being the main destination for digital experts worldwide and London, their favorite city. In addition, Spain is considered by these profiles as the eighth most attractive country to work, and Barcelona the fifth most popular city.

Jorge Guelbenzu, managing director of Infoempleo, says,”In Spain new employment opportunities are being generated in operational areas in which digital transformation is already a reality. However, there is a deficit of domestic professionals who have the specific skills and specialized training to develop and carry out these functions. That is why, on occasion, companies have to look for candidates abroad to fill certain vacancies and, in light of this information, it becomes clear that these professionals are look very keenly towards this country as a place to develop their careers.”

Pablo Claver, BCG partner in Spain responsible for the People and Organization team, emphasizes that “attracting digital talent directly influences the success of a country’s economy, and contributes significantly in positioning ourselves as one of the leaders in digital development. As how companies, governments and institutions can perform an analysis of the supply and demand of digital talent in their country (strategic workforce planning) to create geographical plans for their workforce and develop strategies to become a center for digital experts. The data shows that Spain has the potential to become a world leader in attracting digital talent, which is a competitive advantage.”

The Decoding Digital Talent report is based on a sample of 27,000 surveys conducted in 180 different countries to professionals with knowledge in areas such as programming and web development, mobile application development, artificial intelligence, robotics and engineering.

The report determines that 80% of digital experts have a university degree. In addition, contrary to popular belief, his main preference is to work for a large company, not for a startup. In addition, 68% are men, only 9% of these profiles are in the top management and 41% work in positions without management responsibilities.

Digital experts have skills in areas where demand is growing significantly and urgently, specifically in agile forms of work (18%) and in the field of Artificial Intelligence (AI) (14%).

67% of digital professionals are willing to move to advance their professional careers, but the interest varies greatly depending on the country. More than three quarters of the experts from India and Brazil would move for work reasons, while in countries like China, less than one in four would move for work. In comparison, if we take into consideration other professional groups beyond the digital domain, the percentage of those willing to relocate for work-related reasons is significantly lower, since only 55% would take the decision to change their location. 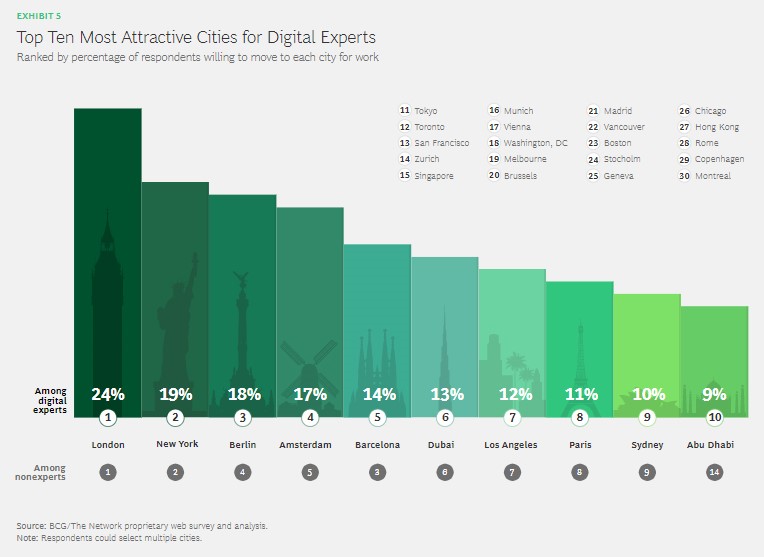 The willingness to change residence is high for digital experts from developing economies, 75% would move to have access to better opportunities to progress in their careers. “In analyzing the data, we also observed that in many parts of the world people with extensive digital knowledge are more interested in moving to a nearby country or a place where they already share the language or culture,” says Rainer Strack, BCG partner and co-author Of the report.

The USA and London, the most popular Country and City to Work Abroad

Besides the US and Germany, the other eight destinations chosen by the digital experts as the most attractive to work abroad are, in order of popularity, Canada, Australia, the United Kingdom, Switzerland, France, Spain, Japan and Italy. However, among non-digital professionals, Spain is in sixth place as the most ideal countries to which they would relocate. The first five countries don’t vary as popular destinations worldwide for anyone interested in changing location, as detailed in Decoding Global Talent 2018.

With regards to cities, London is the prime city in the world for anyone who wants to relocate, as well as the main work destination for digital experts, whose next options in order of preference are New York, Berlin, Amsterdam and Barcelona. The study therefore determines that the attractiveness of some of the best ranked cities exceeds that of their countries among digital experts.

As the report highlights, digital experts value balance between personal life and opportunities for progress and professional development, as well as good relationships with colleagues and managers.

The Challenge for Countries and Recruiters: Attract and Retain Digital Experts

Digital experts capable of coding software or executing advanced AI data analysis are a valuable asset. Companies that need digital experts to lead or expand a company face very tough competition to retain the talent that possesses such skills. In addition to recruiting, companies can meet the needs of their digital experts by offering training or re-evaluation programs to train current employees in new digital knowledge.

In the same way, cities and countries must compete with other areas to recruit or retain digital experts that could be of vital importance for their economic development. The first step towards that effort is to carry out a strategic plan of the labor force for a country or area to trace the supply and demand of digital experts. Governments must also launch education programs and create a national or city “brand” to capture digital talent.

“How countries and companies adapt their strategies to the deficit of digital expertise will be crucial in the coming years,” says Pierre Antebi, director of The Network and co-author of the report. “Recruiters are already aware of the importance of finding and retaining digital talent, so much so that, beyond doing it in their own countries, they have also expanded their activities internationally. They must be more creative than ever and need information to make the relevant decisions. This report with the information it contains is especially dedicated to them. “