The current pension system must be revised

Pablo Fernández, professor of the Financial Management Department at IESE Business School, has written an interesting article on the current and future situation of the pension system in Spain. In this article, he analyzes, with statistical data, the prospects of the current public pay-as-you-go system in our country, and discusses the growing need to reform the current system in view of its unfeasibility in the future.

This situation also generates among current contributors a growing need to subscribe to private alternatives such as Pension Plans, which in the future will complement a level of income in retirement that will be gradually reduced from the public system.

The data on which this thesis is based are set out in a series of statistical tables compiled by Professor Fernandez and presented below.

1.-EVOLUTION OF THE SPANISH POPULATION PYRAMID

The following two figures show the population pyramid of Spain in 1970 and the “spearhead” of 2015. The difference between the two figures is due, at the top, to the increase (on average) in the life years of Spaniards and, at the bottom, to the decrease in births (partly due to the killing of children before birth) since 1980.

There’s a small effect of immigration in recent years. How many contributors per retiree will there be in 2040, in 2050… One thing is certain: many fewer than in 1970 and, unless the birth rate in Spain increases a lot in the next few years, fewer than today. According to the INE, in 2014 there were 9.2 million pensions, 4.6 million unemployed and 16.5 million contributors (less than 2 contributors for each pension). 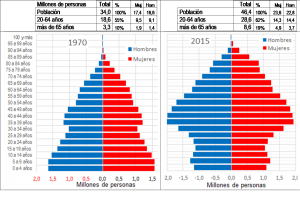 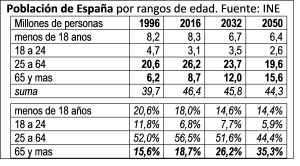 The following figures show the evolution of the volume of Spanish public debt and the return on 10-year and 1-year Treasury bonds. The author wonders “Who buys and holds all this huge amount of Spanish debt, with a ridiculous IRR? The dwindling Social Security Reserve Fund is (in 2014 and 2015) 100% invested”.  Therefore, “it seems obvious (today and many years ago) that the sensible thing to do when it comes to retirement is to try to save something and invest it well to complement the meager pension that the State will probably give us when we retire.

The author explains that “The Reserve Fund accumulates euros 32,481 million at the end of 2015 and its market value is euros 35,035 million. In 2015, the Social Security authorities had 13,250 million euros in the Reserve Fund to resolve the lack of liquidity at specific times and to guarantee the ordinary and extraordinary payment of pensions.

On the other hand, the following graph shows that since 2011 the Social Security has entered into deficit and continues with this trend, despite the increase in the levels of GDP and Employment since 2014. 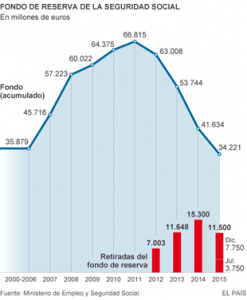 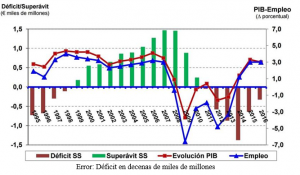 5.- CHANGES IN THE LEVEL OF MAXIMUM AND MINIMUM PENSIONS 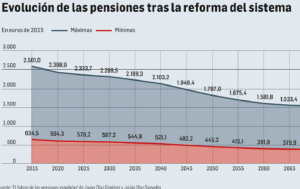 5.- EVOLUTION OF THE NUMBER OF MEMBERS AND RETIREES

The following tables show the evolution 2007-2016 of Social Security members and pensioners which, as shown in the first graph, is negative in terms of membership and positive in terms of the number of pensioners. The second graph indicates that, since 2011, the volume of social security contributions is lower than that of contributory pensions, a trend that has become more acute over the years.

The conclusion from these figures is clear: “the current pension system is destroying value, and its financial self-sufficiency and capacity to withstand adverse economic cycles is severely compromised. Therefore, reform is urgently needed to ensure that pension levels are maintained.

And it also urges a new approach by the asset management industry to investment vehicles (pension funds) that provide a comfortable retirement for investors. Both in terms of costs, as well as diversification, range enhancement, open architecture, and tax incentives. 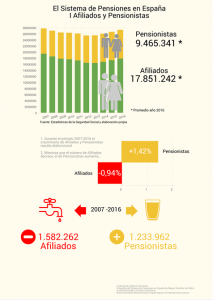 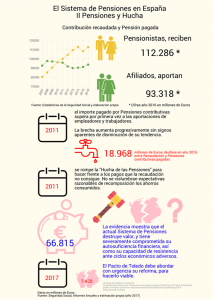 Have collaborated in the article: