The economic and social consequences of the pandemic: in the face of a calculable recession (II)

In this second article, Ramón Tamames, Professor of Economic Structure, EU Jean Monnet Chair and member of the Royal Academy of Moral and Political Sciences, analyses, together with Antonio Rueda, the economic slowdown in Spain and the collapse of the stock market.

The state of alarm

The Spanish economy was already in a phase of exhaustion of the expansion in the fourth quarter of 2019, with symptoms such as the fall in investment due to institutional and international uncertainty, and stagnation of consumption. Variables that were compensated for by a very active foreign sector, and the increase in public spending.

The government’s belated reaction began to be perceived with the first Royal Decree-Law of 10 March, with measures that did not cover the whole spectrum of problems to be faced. The subsequent Royal Decree-Law of 13 March declared the state of alarm according to Article 116 of the Constitution, which in point 2 states:

The state of alarm shall be declared by the Government by means of a decree agreed upon in the Council of Ministers for a maximum period of fifteen days, informing the Congress of Deputies, which shall meet immediately for this purpose and without whose authorisation this period cannot be extended. The decree shall determine the territorial scope to which the effects of the declaration are extended.

The state of alarm recognizes that there is a serious problem that requires all the resources of the state, without this generating the suspension of any right, as established in article 55 of the Constitution. The result was the confinement of the population, a measure whose announcement was seen by more than 35 million television viewers. 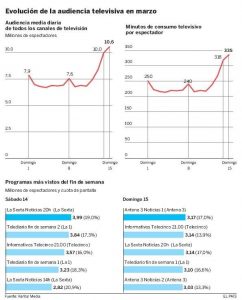 The late announcement after the Council of Ministers on Friday 13 March raises suspicions of internal discrepancies over the economic and social measures to be taken, measures which have a strong impact on the levels of deficit and public debt established by the EU. Discrepancies, it seems, between the Podemos sector, which advocated focusing on social measures, and the Socialist sector, or between the finance minister, Nadia Calviño, and the social security minister, Jose Luis Escrivá.

Impact on the economy and markets

Tamames analyses the direct impact of the coronavirus on four key economic variables: unemployment, recession, deficit and debt, as well as on the stock market.

With regard to unemployment, it will grow again due to the EREs and ERTEs, reaching around four million people. The recession will undoubtedly occur in 2020, due to the sharp fall in GDP of 12 percent. The public deficit will exceed 1.5 percent in terms of GDP, exceeding the limit of 3 percent set by the European Union, which is expected to relax its requirements.

Finally, the public debt will grow, because the government will not be able to count on tax revenues (which will undoubtedly fall) to finance the welfare state. Spain, therefore, could exceed the threshold of 100% debt/GDP, although with no financing cost to the central banks. This scenario already reflected the rise in the risk premium to 146.20 on 17 March.

The difference between the current crisis and the 2008/2013 financial crisis is the good health of the financial system. In the previous one, the state financed the sector with 61 billion euros – 40 billion from the MEDE (European Financial Stability Mechanism) – and refloated the savings banks, which were affected by failed mortgage loans. And this despite the initial indecision of Zapatero’s government, which was slow to recognise the problem.

However, the impact on the stock market has been much greater than that of the past financial crisis; in just one week, the Ibex-35 fell by 40 percent. Thus, on Monday, March 16, the selective fell to levels of 5,900, levels not seen since 2012, after having touched 10,000.  A situation that only injections of liquidity to market makers can alleviate. 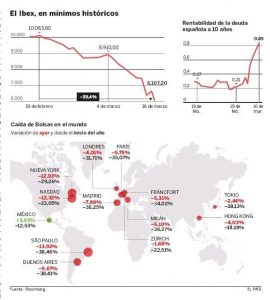 As Nobel Laureate in Economics Akerlof (husband of former Fed Chairman Janet Jellen) explains, such sharp falls in the stock market have a psychological impact on the economy, because they paralyse investment.

From the Royal Academy of Moral and Political Sciences