Borja Bergareche: “Fake news is a problem of the distribution of news by algorithms rather than the quality of information.”

“We have to differentiate between fake news and disinformation,” warned Borja Bergareche, Vocento’s digital innovation director, during his speech at the Proa Observatory, held at Degussa’s headquarters. Bergareche spoke about ‘Profitable journalism in the era of fake news and Silicon Valley platforms’, clarifying exactly what we mean when we talk about fake news, explaining what the new income lines of media sector are, and defending journalism as an industry, because “we have to be profitable day to day.”

In the era of fake news, the value of information and credibility has taken on a new dimension. In this sense, Bergareche acknowledged that “the debate has been oriented, in an interesting way, towards questioning the work carried out in the newsrooms.” He asked for several clarifications in this regard. On the one hand, he defended that “we are not dealing with a problem of production quality; fake news is, above all, a problem of accelerated and indiscriminate algorithmic distribution of human stupidity on platforms such as Facebook or Google,” he said, “the terms have been confused a lot.”

On the other hand, he demanded to proceed to a terminological clarification: “before certain situations, we must speak of disinformation, for example, in the context of the election of Donald Trump; fake news would be, being rigorous, false news spread by media, and it is true that certain media outlets do it; on another level it would be the hoaxes, which are the urban legends of all life.” Faced with this confusion of public opinion about the media, Bergareche has valued the newsrooms of the traditional media, claiming that they are “in themselves a process of verification of information with 150 years of history.”

In relation to Vocento and the print media situation, he claimed the importance it still has despite the digital boom. “Print is not dead, it accounts for two thirds of our income. From there, the challenge for the media is enormous, and focuses mainly on optimizing the traditional business and the diversification and generation of new income.”

Along these lines, Bergareche wanted to highlight three main revenue streams that have been gaining prominence in recent years in the main media in general and in Vocento in particular.  He highlighted the branded content in the advertising field, the commitment to payment models, and the diversification of the business. The promoted content is gaining weight in the media, and “very creative things are being done that really add value.”

On the other hand, he acknowledged the progress made by the major media in terms of the paid digital subscription model, a path that Vocento has been determined to follow for some time now, as he explained, and one of the major trends in the industry at a global level. “It’s been three years since we made the strategic decision to lead the cultural change involved in paying for digital content: implementation is slow and requires even more training in big data and customer marketing, but the bet is unequivocal, now we must work to justify it to our most loyal readers.”

Alternative revenue streams for the media

Finally, with regard to these new sources of income, he highlighted business diversification and the development of new digital businesses. He explained Vocento’s commitment to new themes such as music and gastronomy, as evidenced by the purchase of Madrid Fusion, and also to new profitable digital businesses, such as infoempleo and pisos.com in the area of classifieds, Oferplan in e-commerce or Local Digital Kit in the area of digital services.

Finally, as a teacher and publisher, Bergareche has vindicated the importance of journalism as an industry in the face of “excess fascination” with entrepreneurship models. “We are a key part of a business, social and labor ecosystem, with more than 20 newsrooms and a staff of more than 2,700 people, of which almost 1,200 are journalists, the same number as the New York Times,” he said. “Entrepreneurship brings innovation and dynamism to that ecosystem, and in Spain very interesting entrepreneurial media have emerged, there is room for everyone, but we need large groups to ensure the industrial dimension,” he defended. “In addition, we have an obligation to be profitable every day,” he said. 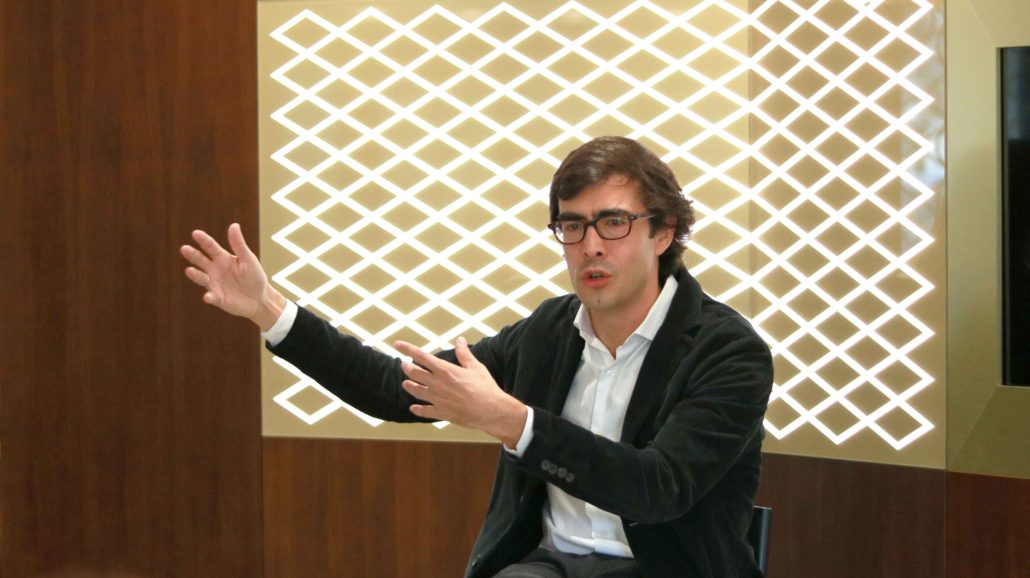 Borja Bergareche is director of Digital Innovation at Vocento, the most widely distributed daily press group in Spain. He has led the creation of the new Vocento Media Lab and is responsible for driving the company’s digital transformation strategy and innovation projects. A lawyer and journalist, he has been the deputy digital director, London correspondent and the Senior International Editor of the newspaper ABC, and has also written for El Correo (Bilbao), El País and La Nación (Buenos Aires).

At the international level, he is a member of the Advisory Council for Europe of the Committee to Protect Journalists (CPJ) in New York, and in 2011 he published “Wikileaks Confidential”, reflecting on the implications of leaks for the press and international diplomacy. In the past he has worked as an advisor for international and constitutional affairs in the European Parliament and the European Commission.

In the academic field, he is a journalism professor at La Universidad CEU San Pablo in Madrid and teaches classes for ABC/Complutense´s master’s degree in Journalism. He has a degree in Law from the University of Deusto (Bilbao) and a master’s degree in International Relations from Columbia University (New York), with a Fulbright scholarship.

The Proa Observatories are stable discussion forums with the participation of prominent executives, politicians and professionals. They are born with the vocation of being a laboratory of ideas where a genuine dialogue is fostered to debate current business issues, as well as corporate reputation, brand and public affairs as important elements for the improvement of companies.

Among the personalities who have participated in these meetings are economist Manuel Conthe; former Minister of Public Administration Jordi Sevilla; former Minister of Education, Culture and Sport José Ignacio Wert; writer and priest Pablo D´Ors; the Director of External Communication of Deloitte, Antonio Belmonte; the Director of Communication and Institutional Relations of El Corte Inglés, José Luis González-Besada, the High Commissioner for the Spanish Brand, Carlos Espinosa de los Monteros, the writer and journalist Pilar Urbano, and the Director General of Information and Publication Control S.A. Publications. (OJD), Manuel Sala, among others.