Workers: Optimists about the Future of Work

The BCG Henderson Institute and Harvard Business School presented Future Positive: How Companies Can Tap Into Employee Optimism to Navigate Tomorrow’s Workplace, a research project detailing a global forecast based on the perceptions of 6,500 business leaders and 11,000 middle-skill workers about the future of work. During times in which public debate about the future of work seems to be dominated by widespread fear of change, the BCG and HBS research has concluded that, in general, workers see opportunities in change and are optimistic about their future job prospects.

Of the 11 countries analyzed in the report, Spanish workers, after the French, give the greatest responsibility to the government in their preparation for the future. Even so, they still consider that they themselves are primarily responsible for their own training. 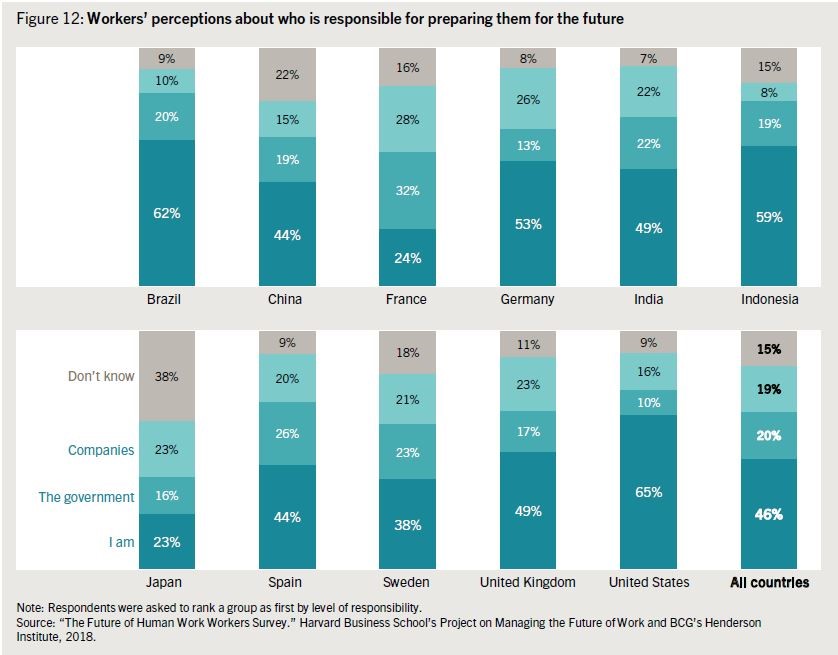 When facing the issue of transforming their organizations to adapt to the future of work, the findings reveal that business leaders underestimate the optimism of a workforce that claims to be happy in their jobs and eager to do the necessary future adjustments. To successfully face this challenge, business leaders have to put aside their preconceived notions and bridge the gap between their perceptions and the reality of their workers’ positivity.

“The workers who shape and will shape work environments in the coming years are diverse. What the findings of this report show is that business leaders are overlooking a key partner in their efforts to prepare for the future: their own workforce,” says Joseph Fuller, a professor at Harvard Business School and co-chair of the project Managing the Future of Work. “Rather than fearing the future of work, employees around the world are absolutely willing to accept change and take action. It is the responsibility of business leaders to recognize this opportunity and be proactive in supporting their employees and generating concrete action plans.”

“It might be surprising, but generally across all of the countries studied, employees do not consider technology to be the culprit of an uncertain future, but rather as an opportunity.” The workers who have participated in our research are optimistic and look to the future with confidence. They also believe that technology can be part of the solution,” says Judith Wallenstein, partner at Boston Consulting Group (BCG) and director of the BCG Henderson Institute in Europe. “Business leaders need to take advantage of their employees’ willingness to help create new organizations based on progress and learning that is fit for the future.“

Researchers asked middle-skill workers and business leaders to describe their point of view on the trends and forces that can influence their work in the coming years. These topics included: new technologies, teleworking, government responsibility, and regulatory changes.

The report includes concrete recommendations for companies, highlighting a series of innovative businesses that have already begun the preparation of their workers and the adaptation of their companies for the future. Some examples of initiatives that these companies have undertaken include: the use of artificial intelligence tools to determine if a candidate has the cognitive ability to be a high-performance worker, the commitment to train workers to learn new skills through disruptive standards, and the use of technology to provide a completely service-oriented business model.

Data from the Report

Managers have a misconception about the outlook of their employees on the future of work:

Middle-skill workers (without university training) are happy in their current positions:

While business leaders try to find out which trends will be key to the future of companies, the most common significant issues have been:

Business leaders point to several reasons as to why their organizations are not preparing for the future:

Workers believe that changes and technology will have a positive effect:

Workers and business leaders agree that they do not perceive the impact of technology as a priority issue.

Future Positive: How Companies Can Tap Into Employee Optimism to Navigate Tomorrow’s Workplace

In order to understand the readiness of companies and workers to adapt to the broad array of forces affecting the workplace – beyond technology- Harvard Business School’s Project on Managing the Future of Work and Boston Consulting Group’s Henderson Institute conducted two global surveys. The first canvassed 11,000 middle-skills workers from 11 countries to learn how those with education levels less than a four-year bachelor’s degree perceive the effect of 15 forces of change (see Table I) on their future prospects. The second polled 6,500 C-suite and senior leaders in 8 countries to understand how to prepare companies and their workforces were to tackle the 17 tectonic shifts (see Table 2) underway. 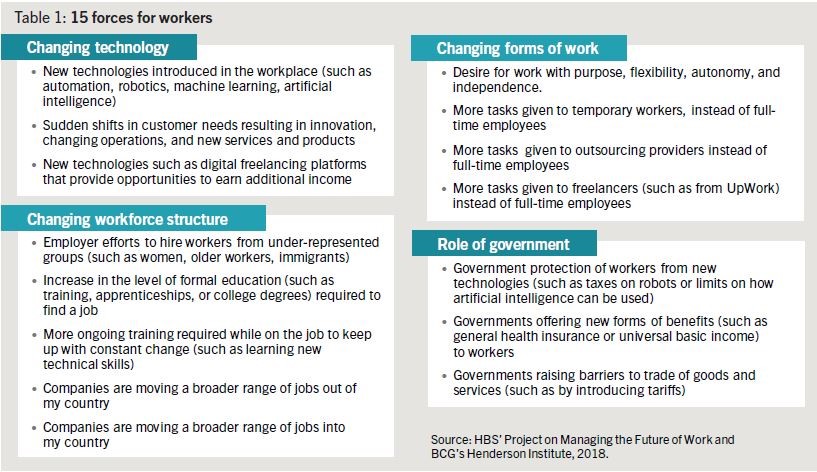 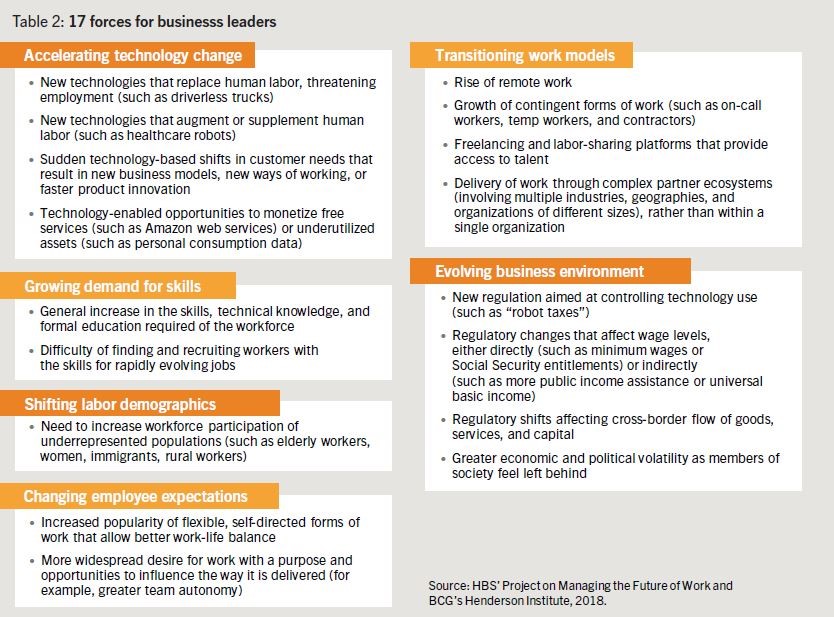